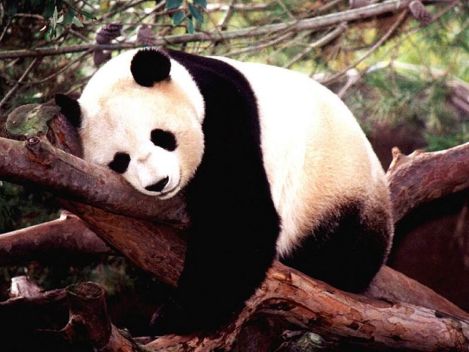 ScienceDaily (Mar. 6, 2010) A Chinese-led team including international researchers with a scientist from Cardiff University, has shed new light on some of the giant panda’s unusual biological traits, including its famously restricted diet.

The team has successfully sequenced the panda genome for the first time and now, the genetic insights gleaned from the work may aid conservation efforts for the endangered species.

Giant pandas are known for their bamboo diet but the researchers discovered that the animal actually lacks the genes necessary for compete digestion of this staple food source.

Professor Mike Bruford, Cardiff School of Biosciences, worked on the study as part of an ongoing collaboration with the Chinese Academy of Sciences, Institute of Zoology, funded by the Royal Society.

He said: “The panda is a true bear and is a carnivore, so it possesses the genes necessary for being a meat-eater and yet its diet is almost exclusively herbivorous. This may suggest that it relies on microbes in its gut to digest bamboo rather than on anything in its genetic make-up.

“Taste is also important when it comes to the development of dietary habits and the sequencers discovered mutations in the panda’s T1R1 gene which may affect its ability to taste meat, one possible explanation for why a potential carnivore would rely on a strict bamboo diet.”

The study found no signs of low variation that is usually linked to inbreeding and results support the potential for successful survival despite the small population size of the species.

In spite of the panda’s low reproduction rates, the study also identified nearly all the reproduction genes critical for mammalian gonad function and development.

Discussing the study, Professor Bruford said “The panda is at high risk of extinction, with current estimates putting total population figures at less than 3,000. The study gives us a fuller understanding of the genetic basis of the panda’s biology, and will contribute to disease control and conservation efforts.”

“Sequencing mammalian genomes also undoubtedly helps our ability to annotate the human genome. A major limitation to this has always been the prohibitive costs involved in the process but the study used a short-read technology that can generate genome draft sequences in a very cost-effective manner.

“This will have far-reaching implications for promoting future genome sequencing of non-model organisms.”

The above story is reprinted (with editorial adaptations by ScienceDaily staff) from materials provided by Cardiff University.