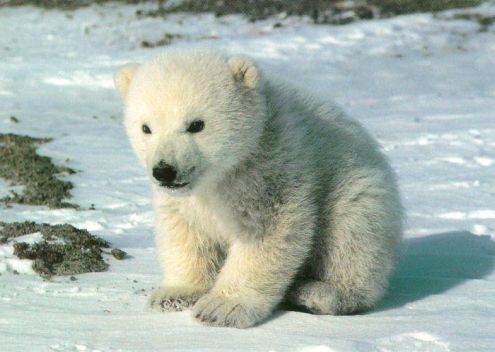 ScienceDaily (Nov. 24, 2010) Will polar bears survive in a warmer world? UCLA life scientists present new evidence that their numbers are likely to dwindle.

As polar bears lose habitat due to global warming, these biologists say, they will be forced southward in search of alternative sources of food, where they will increasingly come into competition with grizzly bears.

To test how this competition might unfold, the UCLA biologists constructed three-dimensional computer models of the skulls of polar bears and grizzly bears — a subspecies of brown bears — and simulated the process of biting. The models enabled them to compare the two species in terms of how hard they can bite and how strong their skulls are.

“What we found was striking,” said Graham Slater, a National Science Foundation-funded UCLA postdoctoral scholar in ecology and evolutionary biology and lead author of the research. “The polar bear and brown bear can bite equally hard, but the polar bear’s skull is a much weaker structure.”

The implication is that polar bears are likely to lose out in competition for food to grizzlies as warmer temperatures bring them into the same environments, because grizzlies’ stronger skulls are better suited to a plant-rich diet, said Slater and Blaire Van Valkenburgh, UCLA professor of ecology and evolutionary biology and senior author of the research.

“The result for polar bears may be lower weight, smaller and fewer litters, less reproductive success, fewer that would survive to adulthood, and dwindling populations,” Van Valkenburgh said. “Then you can get into an extinction vortex, where a small population becomes even smaller in a downward spiral to extinction.

“To people who say polar bears can just change their diet, we are saying they will change their diet — they will have to — but it probably will not be sufficient for them, especially if they are co-existing with grizzly bears. Their skull is relatively weak and not suited to adapting its diet. We did not expect to find what we found.”

“This is one additional piece of evidence that things look pretty bleak for the polar bear if current trends continue,” Slater said.

The research, federally funded by the National Science Foundation, was published this month in the online journal PLoS ONE, a publication of the Public Library of Science.

Polar bears are a “marvelous example of rapid adaptation to an extreme environment,” Slater said. “The fact that we can lose them equally as rapidly as a result of human-mediated climate change is rather striking. Polar bears are very well suited to do what they do, but they are highly specialized and not well suited to doing much else.”

It could take quite some time for polar bears to go extinct, Van Valkenburgh said, but they are likely to become much more rare than today.

Polar bears are losing habitat as a result of global warming and the associated loss of arctic sea ice, which they use to hunt for seals, Van Valkenburgh and Slater said. But could they survive on an alternative food source?

“Our results suggest that this is not too likely,” Slater said. “The polar bear’s skull is a relatively weak structure that is not suited to diets consisting of a lot of plant material like that of the brown bear. As climate change continues, polar bears will be forced to move south in search of resources, while brown bears move north as their climate becomes more mild. When these two species meet, as they have already begun to, it seems that brown bears will easily out-compete polar bears. Our findings should serve as a warning that polar bears may not be flexible enough to survive if current trends continue.

In Canada, grizzly bears are moving north and are already in polar bear territory, Van Valkenburgh and Slater said.

The life scientists — whose co-authors include UCLA undergraduates Leeann Louis and Paul Yang and graduate student Borja Figueirido from Spain’s Universidad de Malaga, Campus Universitario de Teatinos — studied two adult male skulls from museums, one of a polar bear from Canada, the other of a grizzly from Alaska. They built 3-D computer models of the skulls and then analyzed their biomechanics.

“We can apply muscle forces to the skull to simulate biting, and we can measure how hard the animal could bite. We can measure stress and strain in the skull as well,” Slater said. “We found that while the stresses in the grizzly bear skull are relatively low, the same bites in the polar bear produce much more stress. Combined with other evidence from Blaire’s laboratory, this tells us that the smaller teeth of polar bears are less suited to diets that consist of plants, grass, vegetation and berries.”

“Polar bears would not be able to break up the food as well in their mouths and would not digest it as well,” Van Valkenburgh said.

In the timeline of evolution, polar bears evolved from the brown bear very recently, and the two are very closely related, Van Valkenburgh and Slater said. Genetic studies indicate that the split between polar bears and brown bears occurred only 500,000 to 800,000 years ago — the most recent split between any of the eight bear species.

Despite the recentness of the split between these two species, their skulls and teeth are extremely different, probably as a result of where they live (arctic versus temperate regions) and the differences in their diets. Grizzly bears have very large molar teeth, while polar bears have teeth that are much smaller. Polar bears eat seal blubber, which is soft and does not require much chewing, while brown bears consume many plants.

The biologists investigated the rate at which skull shape has evolved in the bear family. They found that the rate of evolution in the branch of the bear family tree leading to the polar bear was twice as fast as the rates in other branches of the tree; it appears that skull shape evolved extremely rapidly in polar bears.

“You don’t see many bears that look like polar bears, and the difference in skull shape evolved very rapidly,” Slater said.

The above story is reprinted (with editorial adaptations by ScienceDaily staff) from materials provided by University of California – Los Angeles. The original article was written by Stuart Wolpert.