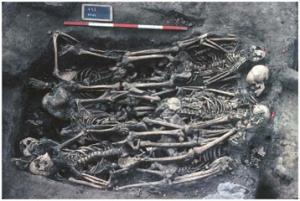 ScienceDaily (Nov. 10, 2010) By studying the dental pulp of skeletons buried in Douai (northern France), researchers from CNRS and the Universitat de la Mediterranee have identified the pathogenic agents responsible for trench fever and typhus. Published in the journal PLoS One, this work reveals for the first time the presence of typhus in Europe at the start of the 18th century and lends weight to the hypothesis that this disease could have been imported into Europe by Spanish conquistadors returning from the Americas.

Between 1710 and 1712, while Louis XIV was waging a war with the north of Europe for the Spanish succession, the town of Douai in northern France was besieged on several occasions. In 1981, during building construction work, mass graves were discovered in the town. The skeletons brought to light were subjected to paleomicrobiology(1) studies directed by Didier Raoult of the Unit de Recherche sur les Maladies Infectieuses et Tropicales Emergentes (CNRS/Universitat de la Maditerrane/IRD), in collaboration with researchers from the Laboratoire d’Anthropologie Bioculturelle de Marseille (CNRS/Universitat de la Mediterrane/EFS).

The manner in which the skeletons found in the mass graves were laid out and the absence of any bodily injuries caused by weapons point to an epidemic, possibly more lethal than the battles that took place during the siege of Douai in the early 18th century. Molecular biology analyses enabled the team to identify the pathogenic agent responsible for the epidemic. Using DNA extracted from dental pulp(2), the scientists identified the DNA of the bacteria responsible for trench fever (Bartonella quintana) and mostly typhus (Rickettsia prowazekii). This is the earliest demonstration of the presence in Europe of the typhus agent, an infectious disease transmitted by lice.

The same team of scientists had already revealed the presence of these pathogenic agents a century later in Napoleonic armies. The genotyping of Rickettsia prowazekii shows that it is the same bacterium that later became rife in Spain, thus supporting the hypothesis that typhus was imported into Europe by Spanish conquistadors at the start of the 18th century.

Paleomicrobiology is a branch of microbiology that specializes in the microbiological diagnosis of ancient infectious diseases by highlighting environmental or pathogenic microorganisms in human samples or former environments.

Dental pulp is the connective tissue located inside teeth and which contains vessels and nerves.

Story Source:
The above story is reprinted (with editorial adaptations by ScienceDaily staff) from materials provided by CNRS (Delegation Paris Michel-Ange).